Teacher and consultant, Christine Barker shares some ideas for using our Phonics Pebbles.

Yellow Door’s Phonics Pebbles offer an engaging visual and tactile way of introducing young children to letters and sounds. They can be used in many ways, both indoors and outside, to support phonics teaching, and give children opportunities to independently show you what they can do.

As soon as children have learned a few phonemes, it is important that they have plenty of opportunities to practise, apply and consolidate their new understanding. The games below can be played very simply with only one of two pebbles to start with, increasing the number of pebbles over time. They can also be easily adapted to suit the needs and interests of the children, perhaps by choosing words that are related to an interest of theme.

What’s in the bag?

Show children a collection of objects whose names contain one or more of the focus phonemes. Put them into an attractive bag or box, saying the name of each object as you do so, emphasising the focus phoneme at the beginning, end or middle of the word. Show children the corresponding pebbles for each word and put these on a tray. Pass the bag round the circle, with each child taking a turn to pull out an object, say its name and match a sound or sounds with the correct pebble(s) on the tray.  Everyone says the name of the object together and puts thumbs up if they agree with the child whose turn it is.

As the children become more familiar with the phonemes, they can take turns to feel for an object, point to the pebble with the phoneme at the start, end or middle of its name and ask the other children to guess what the object is. If they guess correctly the object can go next to the corresponding pebble(s).

The above game can be easily transferred into a sand or water tray. Hide a selection of pebbles in the sand or in bubbly water and ask the children to choose an object from the bag and then dig or ‘fish’ for the correct initial, end or middle phoneme. You can also play the game outdoors by giving a group of children a pebble and a bag, and asking them to look around and collect where appropriate items with the phoneme on their pebble at the start, end or middle of their name. 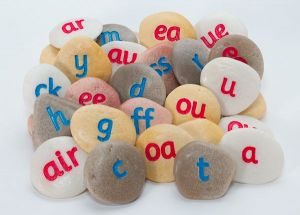 As children become more confident, the pebbles can be used for sorting objects with or without a focus phoneme, such as those with ‘ai’ in them or without ‘ai’. You can also use them to sort objects by focus phonemes, such as those containing ‘ai’, ‘ee’ or ‘igh’. When moving on to alternative spellings, objects can also be sorted into those containing each spelling of the same sound, such as ‘ur’, ‘er’ or ‘ir’.

Take a look at our new Phonics Pebbles and other resources in our Active Phonics range.