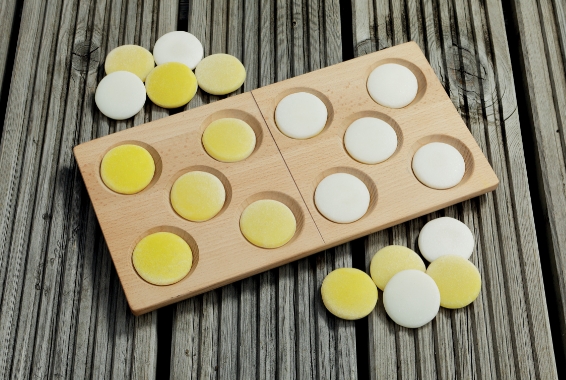 Domino 10-frames are used by teachers in Hungary to support children’s understanding of numbers and their learning of number bonds to twenty (Back, 2014). This is based on the idea that we can instantly recognise numbers of objects up to five without actually counting them – a skill called subitising (Gifford, 2018). The iconic die representation of five is particularly helpful in the process of getting children to remember and visualise the numbers to ten and their composition. By arranging the number of dots in the double die pattern of the frame, children will recognise numbers to ten more easily.

Very young children, and even babies, can recognise the difference between large and small numbers, and will turn their gaze to the larger group or gesture towards it. They also recognise visual patterns easily, and can often recognise sets of three objects, even before they know the number ‘three’ or its symbol – they can subitise three. This ability generally breaks down with numbers over five, so structuring the counters in a double-five domino pattern helps to build on early subitising experiences. It is much easier to distinguish between four and five counters in a domino pattern than in rows as in a traditional 10–frame because the missing one in the middle is much more obvious. 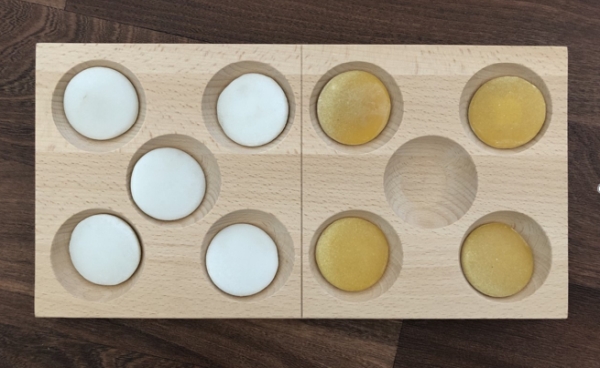 Having opportunities to develop such subitising skills is important as through them children quickly become less wedded to counting items one by one, and so can pay attention to the properties and composition of the numbers. By using Yellow Door’s Two-Tone Counting Stones, different numbers can be shown in different colours, which helps children to consider their composition. Empty hollows in the tray enable children to see complements of numbers to five, and to ten. Two Domino 10-Frame Trays will enable children to work with numbers to twenty.

How to use the Domino 10-Frame Tray

To encourage mental strategies using subitising (and discourage a reliance on counting strategies), an element of speed is necessary. Seeing objects for only a few seconds challenges the mind to use strategies such as subitising.

It is important that children work collaboratively in pairs or small groups as this will encourage them to reflect on and share their strategies. This is helpful in the following ways.

To enable children to subitise, visualise numbers and number bonds, they will need lots of time to play, to practise the tasks until they are fluent and engage with them at increasingly deeper levels. Here are ten suggestions to get you started. The Two-Tone Counting Stones are ideal for these activities as they can be turned over to show a different colour, but you could use any other small objects of your choice.

1. Getting to know the frame 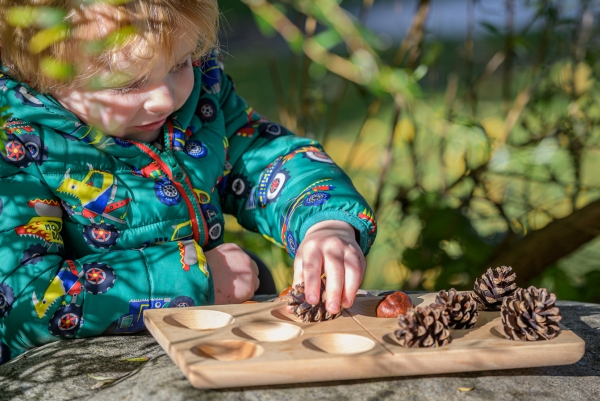 To begin with just let the children play with the frame and find objects to place in the hollows. Watch to see whether they count or systematically fill the hollows on one side and then the other.

Encouraging children to tell you or a partner what they are doing can give you a lot of insights into their mathematical thinking.

Provide a collection of small objects or toys for the children to experiment with. Include some objects that don’t fit in the hollows. This will give the children a chance to consider size, as well as how many hollows they can fill. 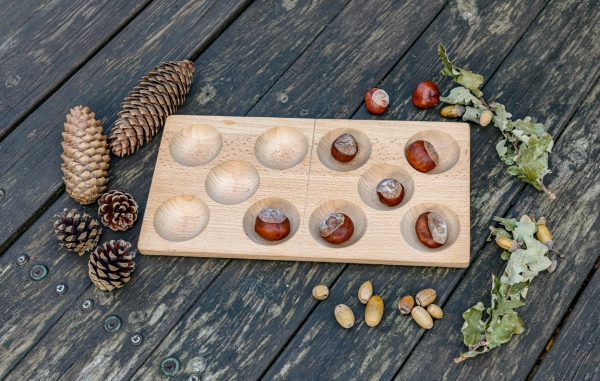 Encourage the children to ‘say what they see’, both to you and to one another. Making observations about what they are doing to the children can help to increase their appreciation of the patterns they are making. My two-year-old grandson put one item in each hollow in the tray, making a little grunt as he did so. Was this the beginning of counting? Perhaps – there was certainly one grunt per object!

3. Counting to five from a larger set

First, focus on counting out a small number of counting stones from a pile. Useful questions include:

My grandson chose to have the yellow-side up for every stone but didn’t say why. Using the Two-Tone Counting Stones gives three options for making five: yellow side, white side, or a both white and yellow. The special arrangement of the five-dot pattern makes it easy to see how many there are without counting, and so the children will be practising their subitising skills.

Once the children have had plenty of experience of filling the whole tray, work with just half of the frame. This will help them to develop a strong and grounded sense of the numbers to five. Ask the children to fill one hollow, then two, three, four and five. Ask them to say what they see each time. Encourage them to say how many hollows are filled and how many are empty. 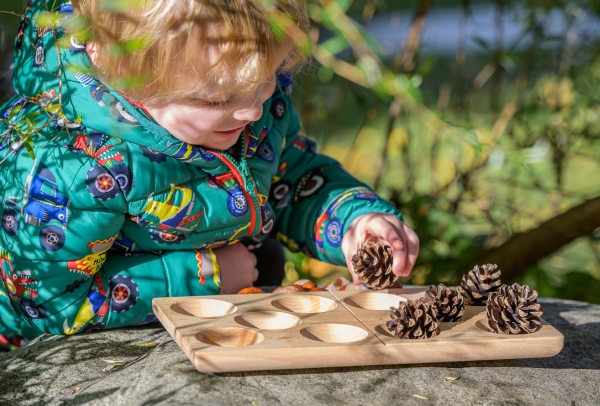 5. More or less than five

Being able to spot whether several stones are more or less than five is a valuable skill that helps to build children’s subitising experience.

Use a cloth to cover a pattern of stones in the tray. Remove the cloth and ask the children if they see more or less than five objects, and by how many. Work with all the numbers from one to ten but focus initially on three to seven. 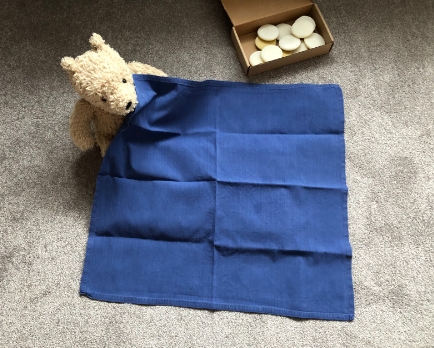 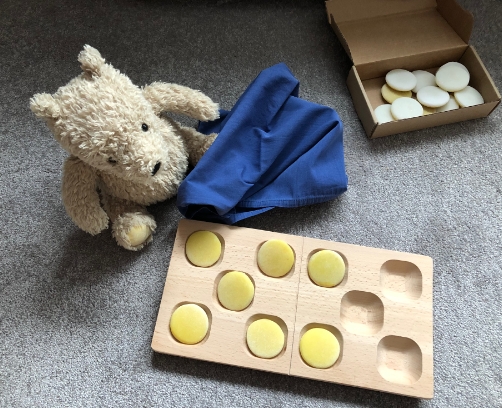 Variations of this hide-and-reveal strategy include: 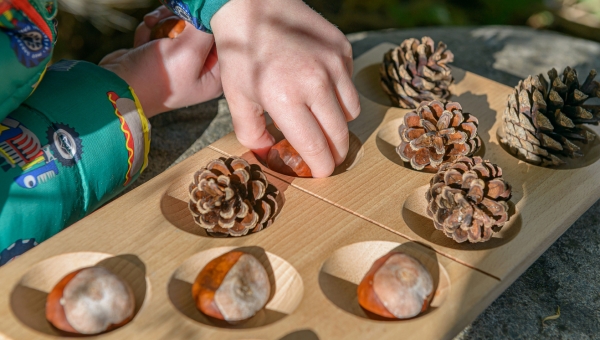 Arrange different numbers of Two-Tone Counting Stones in the tray. Encourage the children to produce different layouts using the same number of stones. Prompt them to use both sides of the stones. 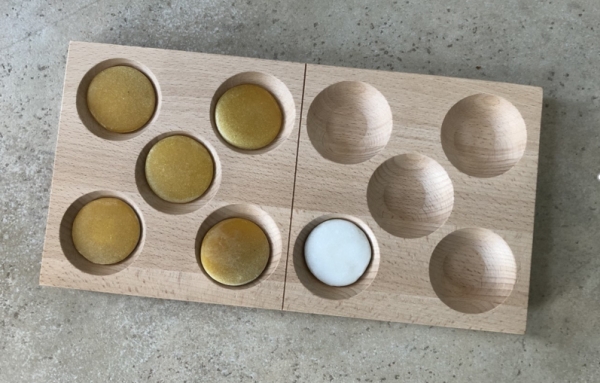 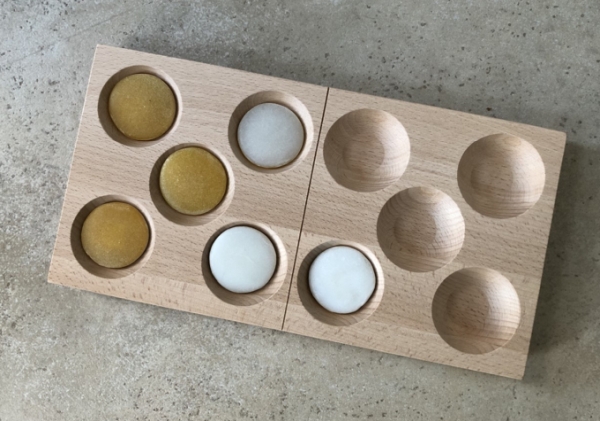 Encourage the children to record what they see using pictures, symbols and later, number sentences.

Invite the children to play with the stones, arranging them to form number bonds to ten using the different coloured sides of the stones. Work towards systematically recording the number bonds to ten consisting of two numbers, and then three numbers. For example, the image above shows three yellow stones and three white stones which make six stones or 3 + 3 = 6. It also shows three yellow stones, three white stones and four empty hollows, or 3 + 3 + 4 = 10. Children could record their results using a camera or tablet, or draw pictures to show their discoveries. Either way, leave the decision to the children rather than force recording on them. Asking them how they might tell their sibling or parent what they have been doing may be a way to encourage this.

The ideas above can be extended to numbers to twenty by giving a pair of children a tray each so that they can work side by side. The easily subitised design of the Domino 10-Frame Tray will help children to develop strong visualisations for all the number bonds to twenty.

This is only appropriate with children who have built up a good understanding of the numbers one to ten and related number bonds.

10. Subtraction as the inverse of addition

Finally, make the Domino 10-Frame Tray easily accessible to children alongside existing resources. Encourage playful interactions with the tray and use it to demonstrate number in daily routines, songs and rhymes. Remember that the representations of five and ten created using the domino tray are not the only ways of doing so, therefore make links with the more traditional 10-Frame Tray, as well as Cuisenaire rods and other representations of numbers. Most of all, encourage children to enjoy their mathematics and to talk about what they are doing. 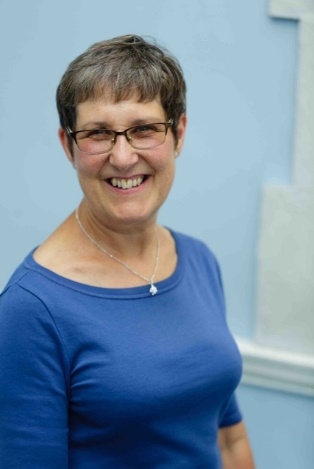 With many thanks to Dr Jenni Back for writing this blog.

Jenni has worked on research and development projects in primary mathematics for several key organisations including NRICH, NCETM, Middlesex University and CIMT at Plymouth University.

Her most recent work focused on using manipulatives in developing the foundations of arithmetic with young children. She is passionate about helping children to make sense of and enjoy mathematics.